Welcome to the World of Tomorrow!

(with apologies to Matt Groening)

After about two years, it's time for another make-over of my site.

My last design had a relatively quirky look, with a bold red/yellow theme built from various irregular vector shapes. The idea was to step away from the typical mold of rectangular aligned frames on a page. I tried to incorporate some elements of perspective into the page composition, but it ended up being a relatively flat, geometrical theme.

This time I wanted to work on the depth aspect and try to create something that feels spacious. To do this, I based the entire redesign on a two-point perspective. While the content itself is normal 2D markup, it sits in a 3D frame. 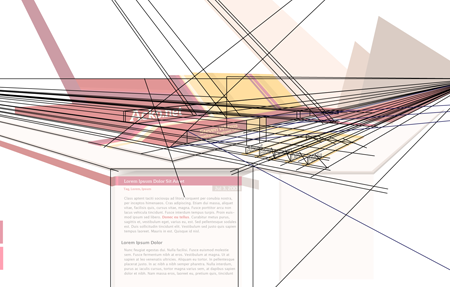 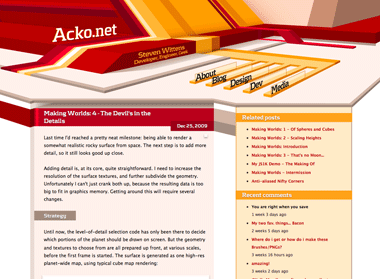 The header image is a regular illustration file (which is 100% manual vector work) and the content is typical HTML/CSS. However there is a twist: the perspective from the header is continued into the content with some simple 3D decorations, created on-demand with Canvas tags and JavaScript (highlight canvases, check out the footer).

The design also uses various CSS3 methods (@font-face, text-shadow, box-shadow) throughout, and uses sIFR 3 as a fallback for the headline font. Unfortunately CSS3 is still mostly unsupported in the browserscape, so only Safari 3.1 users get the luxury combo of pretty, fast and no Flash. Everyone else will have to suffer through hacks.

As a total surprise, the canvas-rocket-science trickery even works in IE6 thanks to Google's ExplorerCanvas library.

I'll probably be tweaking it a bit more in the days to come, but feedback is appreciated.

3D  Acko.net  CSS  Canvas  Design  HTML  JavaScript July 20, 2008
This article contains graphics made with WebGL, which your browser does not seem to support.
Try Google Chrome or Mozilla Firefox. ×