The Reality of Illegal TV Downloads

As you may know, I'm a sci-fi nerd, hence I've been pretty excited about the reimagined Battlestar Galactica series coming to a close. So, me and my fellow connoisseur of the awesome, Greg, put together a quick survey on Google Docs to get predictions about the end of the show. The internets filled it in.

The Battlestar nerdery was all in good fun, but more interestingly, I also asked a question about how people watch the show: via live broadcast, recorded or downloaded? Legally or illegally? Depending on your point of view, these results are either entirely obvious, or quite surprising. So far, 313 people filled in the survey, which was advertised only through blogs and Twitter for two days: 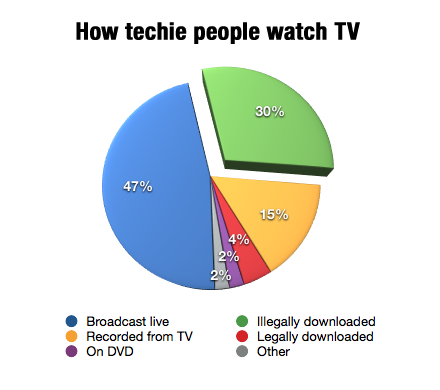 Given the circumstances, the people who answered this fit two descriptions. One, they are fan enough to actually fill out a survey about a show on TV. Two, they read blogs, talk on Twitter, hang out in forums, i.e. they know and use the web intimately. So, SciFi channel SyFy, NBC Universal, all big name media: do you see that big green chunk of people who download your shows illegally? These are merely potential customers that you haven't reached yet.

When you look at your ratings and bemoan the dwindling numbers, think of that 30%. Sure, these people are probably not getting you any ad money, but you can profit off them indirectly. Tech savvy people are the backbone of your nerdy fandom, and they add value to your precious intellectual property. Who do you think helped all those girlfriends, husbands, parents or siblings get over the silly name 'Battlestar Galactica' and actually watch the show? Who wrote all that stuff on the Battlestar wiki in their spare time, providing an anchor for online discussions and activity, keeping your brand active? Yup that's right, the nerds with their computers.

And seriously, those 30% aren't all anarchistic hacker types who despise copyright. A lot of them are just people who want to enjoy the show they love in the way that is convenient for them. An illegal high-definition torrent released a couple hours after the TV broadcast is indeed pretty darn convenient. Lucky for you, you are in the unique position of offering something even better.

Just stop treating the live broadcast as being sacred: it is merely one showing after the content has been made available. Instead, provide your own episode downloads at the same time as the TV broadcast. Make it attractive with additional extras for your hungry audience, like director commentary or deleted scenes. By all means offer a free ad-supported plan like Hulu for those who don't mind having their shows and brains invaded by rabid commercialism.

But please, open up the modestly priced option of high quality, ad-free, DRM-free downloads. The technology is there. If you do it right, you will go from making no money off of these people, to making some money off of them. Trust me, this group is only getting bigger by the day. Of course, it won't be easy: your inaction has caused an entire ecosystem of illegal distribution to spring up across IRC, Usenet, private trackers and the web. These people are organised and very good at what they do. Your competition is tough.

In this light, it's a bit silly to try and push region-restricted, delayed and limited online releases onto people. You're only providing a product worse than what's already available. You're clinging to your old ways, and only succeeding because a lot of this stuff is darn new and only the kids are doing it anyway.

Except, even the grown up folks around me are starting to figure it out. Some run Boxee on their cracked Apple TV (a plug and play process). Some have a dedicated torrent box at home that they log into (screen sharing built into their Mac). They've got phones in their pockets that can network literally anywhere, and look, someone can sell them an app to torrent their shows for a buck or two. See how this whole digital economy stuff works?

BSG  Big Media  BitTorrent  Copyright  DRM  Television March 14, 2009
This article contains graphics made with WebGL, which your browser does not seem to support.
Try Google Chrome or Mozilla Firefox. ×