It hit me a while ago that entering characters which are not available on your keyboard or through your IME is much too complicated. Usually it involves opening up some character map, scrolling through hundreds of symbols to find the one you need and copy/pasting it into the application of your choice.

Not very handy. Enter Sprankle Character Map. The idea is to hit a special key combination when typing (WIN + S for Sprankle) which pops up a character map where you are typing. You then type a symbol to find similar characters and choose one from the list using either numbers or arrows + space. Here's how it looks.

This is just a prototype, but it demonstrates the idea nicely and it's actually pretty usable. Certainly better than firing up a full character map every time. 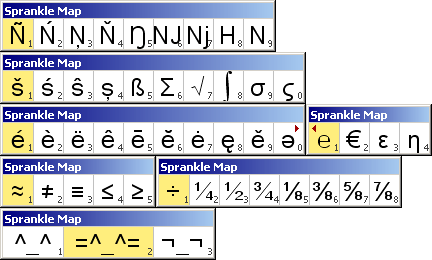 Dev  Unicode December 23, 2004
This article contains graphics made with WebGL, which your browser does not seem to support.
Try Google Chrome or Mozilla Firefox. ×