Update: People keep asking me to use this code, apparently unaware this has been made obsolete by CSS 3D. So it's gone now.

The Canvas tag's popularity is slowly increasing around the web. I've seen big sites use it for image rotation, graph plotting, reflection effects and much more.

However, Canvas is still limited to 2D: its drawing operations can only do typical vector graphics with so-called affine transformations, i.e. scaling, rotating, skewing and translation. Though there have been some efforts to try and add a 3D context to Canvas, these efforts are still experimental and only available for a minority of browsers through plug-ins.

So when my colleague Ross asked me if we could build a Cover Flow-like widget with JavaScript, my initial reaction was no... but really, that's just a cop out. All you need are textured rectangles drawn in a convincing perspective: a much simpler scenario than full blown 3D. 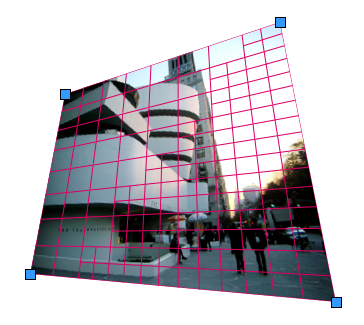 Perspective views are described by so-called projective transforms, which Canvas2D does not support. However, it does support arbitrary clipping masks as well as affine transforms of both entire and partial images. These can be used to do a fake projective transform: you cut up your textured surface into a bunch of smaller patches (which are almost-affine) and render each with a normal affine transform. Of course you need to place the patches just right, so as to cover any possible gaps. As long as the divisions are small enough, this looks convincingly 3D.

So some hacking later, I have a working projective transform renderer in JavaScript. The algorithm uses adaptive subdivision to maintain quality and can be tuned for detail or performance. At its core it's really just a lot of linear algebra, though I did have to add a bunch of tweaks to make it look seamless due to annoying aliasing effects.

Unfortunately Safari seems to be the only browser that can render it at an acceptable speed, so this technique is just a curiosity for now. The current code was mostly written for readability rather than performance though, so it's possible it could be optimized to a more useful state. Feel free to browse the code.

A real 3D Canvas in the browser would obviously rock, but you can still do some nifty things if you know the right tricks...

Canvas  Graphics  JavaScript  jQuery November 11, 2008
This article contains graphics made with WebGL, which your browser does not seem to support.
Try Google Chrome or Mozilla Firefox. ×