Two months ago I got a Nokia N73 hand-me-down from Roland thanks to Nokia's Blogger Relations Program. It's a 'smart phone' with a large 320x240 screen, a 3 megapixel camera and more. Before this, I'd been using an old Nokia 3310 brick (monochrome screen) so this was quite a step up. Still, I wasn't particularly unhappy with my old phone because all I really needed was voice calls and SMS. So I was curious myself to see if I'd actually use all the bells and whistles. 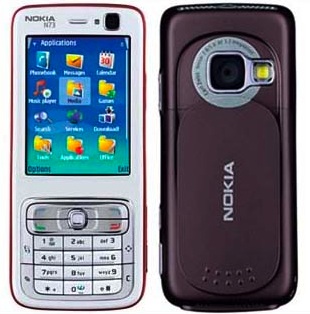 The good news is that making calls and sending text messages has become easier. The default interface has a quick launch bar to access contacts, text messages and other features. Selecting a contact by typing some letters is fast and accurate, and the big screen is easy to read. I also have no problems using predictive text input thanks to years of SMS'ing, while the improved controls (such as the 4-way stick) make entering symbols easier.

Managing my contacts is now a non-issue. I edit my entire address book in Mac OS X and just sync it to the phone, including everyone's pictures. Plus, with Adium address book syncing, this means that it automatically imports IM icons for contacts that don't yet have a picture. However, I did try editing contacts on the phone itself, and it was way too complicated.

Now, the first phone feature I really enjoyed was the built-in camera. Unlike most camera phones, the N73 has a pretty good camera and lens, with auto-focus and all the works. The phone also has a flip cover, so to take a picture, you just slide open the cover on the back and hold it like a real camera (including holding down the snap button half-way for focus). There is even a button to go straight to your pictures.

However, there is a big annoyance here: it takes 5-7 seconds to open the camera application. This is way too long and makes it impossible to snap spontaneous pictures. Also, in spite of all the technical wizardry, pictures in low-light conditions and at night look very bad and washed out. The pictures it takes are also compressed too much. There's a 1GB memory card in mine, so I really wish I could save images to (near-)lossless JPEG.

The second interesting feature was the MP3 player, especially in light of the 1GB of storage which would fit a lot of music. I even found a nice OS X app iTuneMyWalkman that automatically syncs iTunes playlists for me.

However, the phone's music player is simply horrible. The UI makes no use of the N73's buttons: I'd expect to be able to fast forward or backward by holding the stick left/right, and clicking it left/right to go to another song. Instead, you have to press up/down to reach the right on-screen button and then press the stick to push it.

Even more annoying is that leaving the music player stops all playback. If you wish to use the N73 like a real MP3 player, you have to go into a context-menu, scroll down and select "Play in background", then lock the keypad from the main screen every single time. The current behaviour only makes sense if you wish to listen to random audio clips at random moments, which I really don't see myself doing.

To top it all off, there's the fact that you can only use the official Nokia headphones with the N73, because they have a proprietary connector. I already have headphones for my laptop and I don't want to carry another set around.

Next, I've gotten to really like the calendar and the alerts it can provide. However, here I also stick to iCal on OS X and simply sync all my events to the phone. The phone's own calendar input is, again, clunky and cumbersome to use.

After this, I looked at the other capabilities of the phone. A highlight is the included Snakes game, which is in full 3D and features whacky snake action on square and hexagonal grids, even on curved surfaces. I've played it several times while queueing up for various things, and it's fun and easy to pick up. Bonus points for the automatic checkpointing of your progress in the game.

For playing video, the phone uses RealPlayer. Now, I realize this might sound a bit irrational, but I for one don't want anything to do with Real. They have screwed over their users for years on end producing ridiculously crappy players bundled with some of the most insidious spyware and adware seen. But even disregarding that, RealPlayer is a horrible choice as it doesn't play any of the most popular video formats, like DivX or QuickTime. With open-source players like VLC being able to play every format under the sun, there is really no excuse for this.

As for the internet features, I can't try them out because I have no data plan. It's apparently impossible to get an unlimited data plan in Vancouver, unless you get a Hiptop or have connections.

After two months, the only thing I've consistently used other than voice calls and SMS is the camera, because it is really good for a phone. All the pictures on my Flickr page since December 1st were taken with the N73. I also listen to music whenever I can, but the MP3 player and proprietary headphones are too cumbersome.

The only part of the N73 that really stands out for me is the phone's form factor. I love that in spite of all its features, it's only as big as a typical phone. It's clearly designed for snapping pictures with and the screen is large and gorgeous. If the data-cable and file system didn't suck so much, I'd probably use it as a USB stick too (or better, if you could mount Bluetooth storage as local, ejectable drives).

Having used this phone, I can clearly see why traditional cellphone makers should fear Apple's iPhone. I've consistenty avoided using the phone's built-in tools like address book and calendar editing, because doing it on my Mac is orders of magnitude easier and faster. From what I've seen, the iPhone changes that. I really wish the iPhone will bring a fresh wave of usability improvements for mobile devices. But, if usability was all that mattered, we wouldn't be seeing so many Windows installs out there either...

Nokia  Usability  iPhone January 31, 2007
This article contains graphics made with WebGL, which your browser does not seem to support.
Try Google Chrome or Mozilla Firefox. ×