A new default theme for Drupal?

We've long wanted a new default theme for Drupal. Our trusty workhorse theme Bluemarine has long outlived its usefulness: the markup still contains tables and the look is quite dated. Pretty much everyone in the Drupal community agrees with that.

For Drupal 5, some work has been done on a new default core theme. The Lullabot guys have built a valid, flexible XHTML/CSS template and ported an OSWD template to it with the help of others in the community. The theme has been reviewed and tweaked to death by a bunch of developers. Many people have said that this theme (called Delicously Zen) is our new default theme and that it should be added immediately.

Stefan Nagtegaal has also been designing a theme. He offers an alternative called Themetastic which is a better choice in my opinion.

There have been some mails back and forth about this in private, but I wanted to jot down my thoughts here for everyone to see as well, as my opinion is based on more than just taste. And, as a core committer and someone who has done plenty of theming work for Drupal, I do think I have a good perspective on the issue. Please read on. 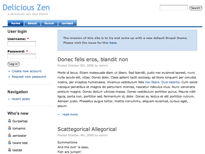 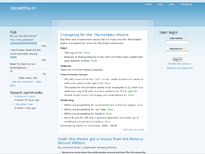 I think a good new default core theme should offer the following:

Note that I did not say anything about easy editability. This means whether the theme should be easy to make small adjustments to, for your own purposes. In my opinion, this condition goes against the two last points above:

So, I think any theme which is intended to be a base for themers is by definition unsuitable to be a default core theme. This applies to Deliciously Zen. I also think Deliciously Zen is problematic as far as branding and aesthetics go:

In short, I think Delicously Zen makes a lousy default theme. However, one thing I've heard people say is that "it's at least better than Bluemarine so there really is no reason not to make it the new default theme".

I disgree. Right now, Drupal has a very high visiblity and the Drupal 5.0 release is definitely going to be a major event. If we replace Bluemarine with Deliciously Zen, people are going to be shouting "Drupal 5 has a brand new look!" as soon as it's released. This will build high expectations for existing and new users alike; expectations which Deliciously Blue does not meet by far.

What we end up with is confirming what people have 'suspected' for a long time: that us poor, silly Drupal people just don't 'get' design and that Drupal will always remain the clunky, ugly CMS it is now. To counter this, we just don't need a theme that doesn't suck, we need something that looks great.

Now, as an XHTML framework for developers and designers, Zen is great and can go into core, but not without a much better default theme to sit beside it. I think Themetastic is that theme:

Themetastic does need a lot of finishing touches, but some people plain don't like it either. However, I'm well aware that it is impossible to please everyone, especially when it comes to design. I'm going to try working on Themetastic with Stefan this week to see if it can be further improved. This might include some drastic changes to the overall design, but only if they don't compromise the harmony of the whole.

I think Themetastic is the new default core theme in making. However I do want to emphasize that I do want a solution that makes at least the majority of people happy ;).

Drupal  Theming October 17, 2006
This article contains graphics made with WebGL, which your browser does not seem to support.
Try Google Chrome or Mozilla Firefox. ×